Legend says that from the 15th to the 19th century, public executions took place on Registan Square in Samarkand. The ground was covered with sand to absorb the blood, and hence the area was named Registan, which means ‘sandy place’.

Whether true or not, this ancient square has many uses – it was the main market square and social centre of medieval Samarkand. There were numerous trade shops, caravanserais and covered trade markets. People gathered here when the decrees of the rulers were read.

In 2001, Registan Square was included in the UNESCO World Heritage List. Once every two years, this ancient square hosts a grandiose music festival “Sharq Taronalari”, which means “Melodies of the East”.

The square is widely known primarily for its famous ensemble of three madrasahs (theological schools) – Ulugbek, Sherdor and Tillya-Kari. They were built at different times, and each one is beautiful and remarkable in its own way.

The first of these majestic giants was the Ulugbek Madrasah, built in 1417-1420 by order of the ruler of that time, Ulugbek. The Ulugbek Madrasah was considered the most prestigious university in the Islamic East.

Sherdor Madrasah was built much later, in 1619-1636. The idea was to repeat the Ulugbek Madrasah, but something went wrong with the proportions and the original building did not stay for several decades even. It was reconstructed in the 1960s and today visitors are greeted by a portal decorated with a symbol of power – a leopard that carries the sun on its back, a swastika and the inscription “God Almighty!”

Tillya-Kari Madrasah, which means “covered with gold” began construction in 1646. Its walls and vaults are decorated with abundant gilding as well as traditional paintings and mosaics. 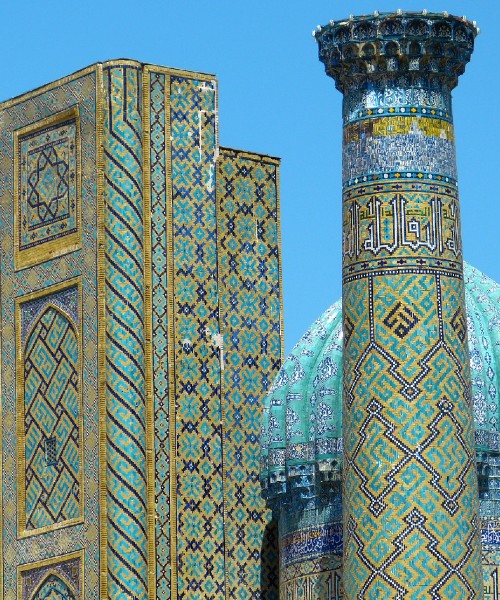